The Federal Communications Commission is throwing its support behind two 5G testbeds — one in New York City, one in Salt Lake City — with experimental licensing which will let companies and universities more easily take their 5G testing into real-world urban locations.

Funding for the two 5G testbeds was announced last year by the National Science Foundation. The FCC’s Office of Engineering and Technology said this week that it is establishing expanded Innovation Zones in the testbed cities that will “provide opportunities for qualified licensees to test new advanced technologies and prototype networks – such as those that can support 5G technologies – outside a traditional small campus or laboratory setting.”

In recent years, the FCC revamped its experimental program licenses to allow licensees to conduct testing for multiple, non-related experiments under a single authorization within a defined geographic area. “The Innovation Zone takes this concept a step further by effectively providing an extension of a Program License’s authorized area of operation,” the OET said — in other words, as long as the experimental license holders operate within the parameters set for a particular Innovation Zone, protect incumbents and provide advanced notice to the zone administrator, they can operate in the testbeds in New York and Salt Lake City without needing new authorization for that location.

FCC Chairman Ajit Pai said that the projects “will test new advanced technologies and prototype networks like those that can support 5G technologies,” and that the Commission is “establishing a process to ensure new innovators can have access to this testing resource while protecting current, licensed users.”

National Science Foundation funding for the two 5G testbeds under the Platform for Advanced Wireless Research Program (PAWR) was announced in 2018. PAWR was set up to provide $50 million in federal funding, plus $50 million in cash and in-kind contributions from dozens of industry partners, for the development of four city-scale 5G testbeds for wireless technology research. New York and Salt Lake were the first two announced testbeds, and the Research Triangle area of North Carolina has since been added as a testbed — though not yet as an FCC-designated Innovation Zone.

US Ignite, the organization which manages the PAWR fund in partnership with Northeastern University, has already put out a notice for competition for the fourth testbed, which will focus on “delivering fast, low-latency, and reliable broadband services to rural users in an efficient and affordable way.” Proposers are expected to “create a testbed for experimenting with advanced wireless technologies and network architectures – combined with existing technologies – that could transform the existing broadband deployment cost curve” and to “envision solutions that can connect end users over a span of tens of kilometers/miles, while supporting low-cost delivery of data rates higher than achievable today.”

Letters of intent to apply for the rural testbed project and $8 million in funding are due October 25, with proposals due in mid-December and an announcement of a platform winner expected in the third quarter of next year.

In other test news:

-Using drones to test 5G networks? Rohde & Schwarz said that it has done just that, in partnership with Ericsson. The test company said that using drones for 5G testing has significant advantages over traditional walk testing 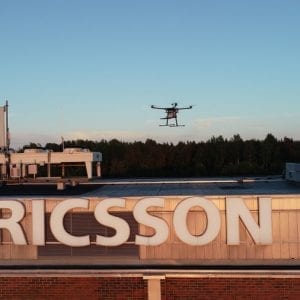 or drive testing, because the UAVs provide “unprecedented repeatability and positional accuracy with the ability to verify beamforming and map coverage in 3D.”

The drone-based test system uses mobile network testing scanners and smartphones from Rohde & Schwarz mounted on a drone which “can be programmed to execute automatic tests with considerable flexibility, for example for precise route selection and drone speed control,” R&S said, adding that using drones rather than human tester “is especially valuable for industrial use cases.” Rohde said that its TSMA6 network scanner is mounted on a drone and is “able to simultaneously verify important LTE and 5G NR coverage metrics such as reference signal received power and signal-to-interference-plus-noise ratio” and that when combined with its  R&S QualiPoc Android smartphone-based optimizer, information on application quality of service, IP trace and serving cell parameters can also be gathered. The solution currently uses an LTE device, R&S noted, but it will soon support 5G devices such as Samsung’s S10 5G.

-Ted Rappaport, founder and long-time leader of the NYU Wireless research center at the Tandon School of Engineering, has stepped down and the organization has a new director: Thomas Marzetta, credited with originating the concepts behind massive multiple-input multiple-output antenna systems. Marzetta has been a professor at NYU Wireless since 2017. Rappaport said that he plans to travel and lecture, and that it is “the ideal time to bring in a new leader to direct NYU Wireless, to propose fresh new ideas, and to continue the growth and vitalization of the center. I believe that Tom will fulfill this role admirably. His unique research perspectives, combined with unparalleled industrial experience, are ideally suited to serve the needs of our students as well as those of our industrial affiliates.”

NYU Wireless said that Marzetta’s current research is focused on “6G,” with a research initiative called “Beyond Massive MIMO” in which he is “investigating entirely new principles of operation that could result in wireless systems performing at previously unimaginable levels.”

–Keysight Technologies continues to bolster its position as a leader in approved test cases for 5G conformance. The company says its 5G New Radio network emulation tools now have PTCRB-approved protocol conformance test cases for non-standalone mode (NSA) in both frequency range 1 (FR1) and FR2 as well as in standalone (SA) mode in FR1.

Letter from the President Greetings PWA Members! I am very happy to be serving as the PA Wireless Association President this year. I look forward to hosting our 2021 events and supporting our … END_OF_DOCUMENT_TOKEN_TO_BE_REPLACED