How AT&T is searching out enterprise 5G use cases: Vorpal and real-time drone detection

If 5G will be enterprise-led, as AT&T believes, then what are the use cases that its network will need to support — and which ones will generate the revenue that will justify new capital investment?

The carrier is using its AT&T Foundry location in Plano, Texas, to showcase the capabilities it can bring to bear in its network by leveraging edge computing and eventually, 5G — and “co-create” with ecosystem partners who will be able to meaningfully leverage those new capabilities, according to Vishy Gopalakrishnan, vice president of AT&T Ecosystem & Innovation.

“One of the things we do is very actively engage with the ecosystem. We do that to keep track of innovation that’s happening externally,” said Gopalakrishnan. “There’s just a tremendous amount, just from sheer volume and speed of innovation, that happens outside AT&T.” Then, he says, AT&T’s team assesses where it can leverage some of that innovation in how it runs its own operations, or to bring new capabilities to market to help its customers.

“We’re trying to systematically work with companies who are developing those kind of capabilities and applications,” Gopalakrishnan said.

The discussions with Israeli drone-detection start-up company Vorpal, he said, began as AT&T looked at the intersection of 5G and edge computing: a combination of a need for highly reliable, real-time computing that is very sensitive to latency variations.

AT&T Foundry has six locations, including one in Tel Aviv, Israel — which is where Vorpal came onto the company’s radar. Vorpal focuses on the detection and identification of drones, using a network of sensors “listening” to the radio frequency environment in order to identify in real-time where drones are, and to track them. That capability has applications for law enforcement, public safety and for commercial operations — such as airports — as well as government installations. Gopalakrishnan added that another important aspect of how AT&T’s innovation team operates is that it also engages with internal stakeholders in the company — AT&T’s business unit, for instance. Between Gopalakrishnan’s team and the network operations team, he said, they figured that it was a use case that AT&T should look at.

Detecting drones and enabling law enforcement or public safety agencies to take some type of counter-measure depends on drone location information being both highly accurate and coming in real-time, because the aircraft can move quickly. Scaling to detect and track thousands of drones simultaneously will require a vast amount of computing power.

In December 2018 and January 2019, there were a spate of airport shut-downs due to drone sightings, causing major disruptions multiple times at London’s Gatwick and Heathrow airports, as well as a temporary halt to air traffic at Newark’s Liberty Airport. The Federal Aviation Administration is projecting that while small-model unmanned aircraft systems, aka UAS or drones, will grow only modestly through 2023, the fleet of commercial UAS in operations is expected to nearly triple to more than 835,000 by 2023, with an average annual growth rate of 24.7%.

So after an initial engagement with Vorpal and Amdocs in Israel to test the performance of the company’s Vorpal’s VigilAir drone tracking and geolocation application, AT&T moved forward with testing out an edge-computing-based system. The Plano AT&T Foundry hooks into AT&T’s network and is focused exclusively on co-creating with enterprise customers, Gopalakrishnan said, highlighting edge computing and 5G in particular and showing what they could mean for sectors such as retail, financial services and the public sector. So it was the perfect place to determine how a combination of technology from Vorpal, Microsoft Azure and AT&T’s network in order to provide a low-latency computing environment. Microsoft was a key partner in the effort, which leveraged its Azure IoT and AI services and Azure Stack hybrid technology.

The goal of the testing, Gopalakrishnan said, was to figure out “can we use the network architecture to provide low-latency network compute for Vorpal, and what can we learn from that? And what can be 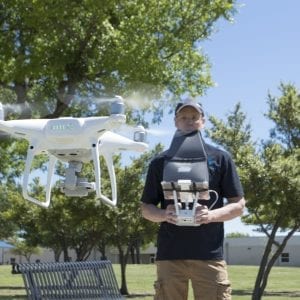 A drone pilot during testing with Vorpal at AT&T’s Foundry in Plano, Texas. Image: AT&T.

extended to other applications as well?”

So the testing went ahead: Vorpal’s sensors, deployed over AT&T’s LTE network in a one-square-mile perimeter around the Foundry location, with four drones to put them through their paces.

Previously, Gopalakrishnan said, Vorpal’s model was that they could set up anywhere, and would bring computing resources with them to a location where they deployed their sensors. He said that the partners were able to achieve a 40-to-50% improvement in network latency when operating from the network edge, compared to relying on the public cloud, with latency in the LTE network of between 24-40 milliseconds. AT&T wanted to do more testing, he added, and are working on a next phase with Vorpal that is software-related, to deliver its offering in a software-as-a-service context. The edge deployment of Azure capabilities allowed access to low-latency processing at a “fraction of the cost of traditional, embedded processing,” AT&T said in a blog post on the project, and the edge computing capabilities not only reduced latency but also produced latency rates that were consistent, which is important to quality of service in an application like Vorpal’s.

While the testing is LTE-based for now, Gopalakrishnan said, as 5G becomes more widely deployed, more bandwidth and even lower latency will improve the service even beyond what it can currently achieve — and such a network/compute environment could be attractive not just to companies like Vorpal, but others with similar use cases. AT&T is also bolstering its partnership with Microsoft, with a newly announced strategic alliance that makes Microsoft the company’s preferred cloud provider for non-network applications and enabling Microsoft to “tap into the innovation AT&T is offering on its 5G network, including to design, test, and build edge-computing capabilities.” (Full story here.)

“What we’re doing is, instead of just designing in a vacuum, we’re using what we learn from an engagement with someone like Vorpal to inform our thinking and test some of our assumptions, refine how we should think about scaling,” said Gopalakrishnan. “What’s a good way to think about where these edge locations should be? What applications should be distributed out to the edge? That kind of discussion has to be done with how the ecosystem actually builds these applications and services. It requires us to actively engage with and collaborate with the ecosystem. That’s a a big part of how we’re approaching this, and any capabilities around edge computing. We want to build that with actual input from the ecosystem.”

Over the past year-plus at the Plano Foundry, Gopalakrishnan said, A&T has made a point of being open and transparent as it works with partners, and focused on listening to them. While AT&T has the network expertise, he noted, the applications that will take advantage of 5G are largely coming from third parties — and the more efficient AT&T can be at architecting its network with a good understanding of the needs of the applications, the better off both AT&T and the ecosystem will be. There is still technical work to be done, he added, but the business case to drive 5G investment is critical.

“There will be capabilities that work in LTE environments that will just be faster and much better in 5G, and then there will be a whole set of capabilities and services that will be net-new in a 5G environment,” Gopalakrishnan said. “For that to happen, we realize that a bunch of things have to catalyze.” For an application such as mixed reality to become ubiquitous and mainstream, for example, development has to happen at all levels from software development to user equipment and chips, to the network which can support the low-latency and high-bandwidth that are needed. And a major

Still, he said, the Plano Foundry has showed AT&T that “the ecosystem is hungry for ways to capitalize on the potential of edge. And the only way that can happen is if we work together. … I think our approach gets validated every time we engage.”

The post How AT&T is searching out enterprise 5G use cases: Vorpal and real-time drone detection appeared first on RCR Wireless News.

April 8, 2022 Dear Pennsylvania Wireless Association Members: As most of you are aware, PWA has a Regulatory/Legislation Committee. Through this committee, we have a unique opportunity to … END_OF_DOCUMENT_TOKEN_TO_BE_REPLACED