Wondering whether all of those 5G performance claims are true–Now we have conclusive proof!

If you are an operator, 5G deployment is, for sure, one of your highest priorities. Considering the huge investments involved, you always wonder whether all the outlandish claims of 5G are true. The rapid expansion of 5G with more than 30 commercial networks and around 40 devices should give you some solace. Unless you have tested and trialed the technology yourself, it is natural to be skeptical. It turns out most of those bold performance claims of 5G are true, according to a comprehensive report published by a renowned analyst firm Signal Research Group (SRG)!

Since the launch of first 5G networks, there has been a lot of ad-hoc and anecdotal testing done by many analysts as well as curious, tech-inclined consumers. I am willing to bet that you have seen a bunch of Ookla speed tests posted on your favorite social media platform. I have done some user experience testing myself as well, on Sprint’s Chicago 5G network. But SRG went the whole nine yards, and then some. They went all around the world and tested many commercial live 5G networks. The testing included millimeter-wave and Sub-6GHz bands, outdoors, indoors, and stadium settings, fixed and mobile scenarios, multiple applications such as downloading and streaming, and more, while also checking battery life performance. They transferred 100s of GBs of data to make sure their observations are consistent, comprehensive, and repeatable.

During such testing and benchmarking, one important requirement is to use the same or similar devices across all tests for consistency and true “apples-to-apples” comparison. Since this testing covered multiple countries/continents and many different spectrum bands, it was better to use a set of devices that support all those combinations. Considering that, the choice of devices was simple— smartphones based on Qualcomm’s 5G modems and RF. These are used in all the 5G networks launched so far. It is noteworthy that Qualcomm is the only vendor to support the millimeter-wave band so far.

Here are some of the major findings of the report:

5G speeds and capacity were 2-time to 10-times better than LTE. There are a lot of variables here, but the wide bandwidths of 5G are the major reason for this improvement, especially the millimeter-wave bands. Here is a chart for a test in Seoul, comparing Sub-6GHz 5G and LTE speeds.

The speed measurements only show the qualitative difference. The real end-user impact can only be measured by the improvement in the experience of the applications people use on a daily basis. 5G downloads were five-fold faster, video streaming quality was far better with far fewer video stalls. Here is a chart that compares the video quality received by LTE vs. 5G phones.

The tide of the negative perception of millimeter-wave seems to be slowly turning. Premature deployments, wrong preconceived notions, combined with non-scientific testing had given a bad rap to millimeter wave bands. But this report puts all those myths to rest and gives conclusive evidence on the benefits of millimeter-wave. The chart below shows the Non-Line of Sight coverage provided by millimeter-wave bands.

One of the most relevant use cases for millimeter-wave is stadiums. SRG did detailed testing of a network deployed in an NFL stadium and showed how near-ubiquitous coverage can be achieved with millimeter-wave, offering speeds exceeding 1 Gbps, as shown below. 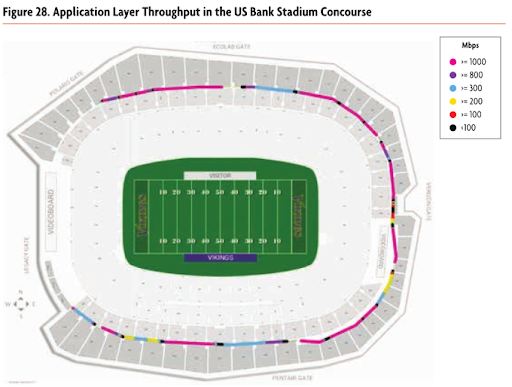 Contrary to the common belief, the testing indicated that 5G can be more energy-efficient than LTE, especially when using high bandwidth applications. With lower bandwidth applications, LTE tends to have the advantage. However, the analysis indicated that a full day’s battery life is achievable for most usage scenarios. Here is a chart comparing the amount of data that can be downloaded using 5G and LTE for a similar-sized battery

I should point out that the charts shown here are a small sample of about 40 detailed charts and figures in the report. It also includes specifics on the methodology and the assumptions used.

It wouldn’t be wrong to say that SRG’s report is a true feast to enquiring minds and a must-read for anybody trying to understand the real benefits of 5G, from smartphones and enhanced mobile broadband perspective. SRG takes a comprehensive scientific approach to all the aspects of testing. All of the assertions are borne out of objective and thorough analysis. The results are presented in an easy to understand way, making it an excellent read for both high-level executives as well as detailed-oriented engineers. No matter whether you are a 5G skeptic or somebody who is on a journey to explore the true benefits of 5G, look no further, study this report, and become an expert.

The post Wondering whether all of those 5G performance claims are true–Now we have conclusive proof! appeared first on RCR Wireless News.