For mobile network operators looking to upgrade to 5G, the vendor community is dominated by a limited number of end-to-end suppliers. Aside from the obvious economics this paradigm prescribes, in a software-defined, 5G world, this lack of openness can potentially limit agility and innovation.

But it doesn’t have to be that way according to John Baker, senior vice president of business development at Mavenir. In a keynote session at 5G World, Baker provided an update on the development of virtualized and open RAN, describing the potential for a major shake up in the vendor landscape on the back of open interfaces, platforms and ecosystems.

“I think it’s one of the biggest changes that’s really going to come out in the 5G world,” Baker said. “Open RAN really is the ability to change the vendor ecosystem. What we’ve seen is a whole bunch of vendor lock-in that has really happened through the standardization processes. Openness is now starting to appear in the industry, which I think is going to bring a lot of new innovation and new vendors into this marketplace.”

Baker described vRAN as just one application within a broader open RAN architecture. “With vRAN as an application, you can run other applications side by side. The base station of the future, it will look like an iPhone. We’re soon going to see base stations with their own app stores. If I’ve got multiple vRAN applications coming to market…I can change my vendors overnight. It’s going to be healthy competition.”

“RAN is where all the dollars are spent,” Mavenir SVP John Baker said. And, in the U.S., those RAN dollars primarily go to two vendors–Nokia and Ericsson, he said.

Open RAN Alliance member NTT DoCOMo in September said it worked with Fujitsu, NEC and Nokia on multi-vendor interoperability for 4G and 5G base stations using specifications developed by the O-RAN Alliance membership. The company said the trial “is believed to be the world’s first realization of this level of multi-vendor interoperability in 4G and 5G base station equipment conforming to O-RAN specifications.”

DoCoMo said the ability to pick and choose RAN components with no problems associated with vendor lock-in “make it possible to select the equipment most suitable for deployment in any given environment.”

Network economics and cloudifying the RAN

Base stations today are a cabinet and radio with the necessary plumbing, Baker said. With a virtualized RAN, you swap out those proprietary boxes for general-purpose servers running specialized software. “We’re looking at exploiting how virtual RAN changes the cost make up of building a network.” This can amount to something in the neighborhood of 40% savings, he said. “That’s really what’s driving the network operators to focus on this. It’s all about openness in the future.”

With 5G, the big differentiator for operators will be the ability to quickly spin-up new services. But if they’re all using the exact same equipment, “It makes it very hard for the operators to compete. The operators have a lot of hard decision-making to do. If they have a problem, they give it to Nokia and Ericsson. If operators focused on forcing open interfaces, there’d be a lot more vendors in the market. Something’s got to change to ensure the future of the mobile industry.”

In August, Nokia claimed the world’s first commercially deployed 5G cloud RAN; the vendor didn’t specify the carrier but a tweet from an official Nokia account suggested the tech was being exhibited at a Verizon Enterprise event in Dallas. 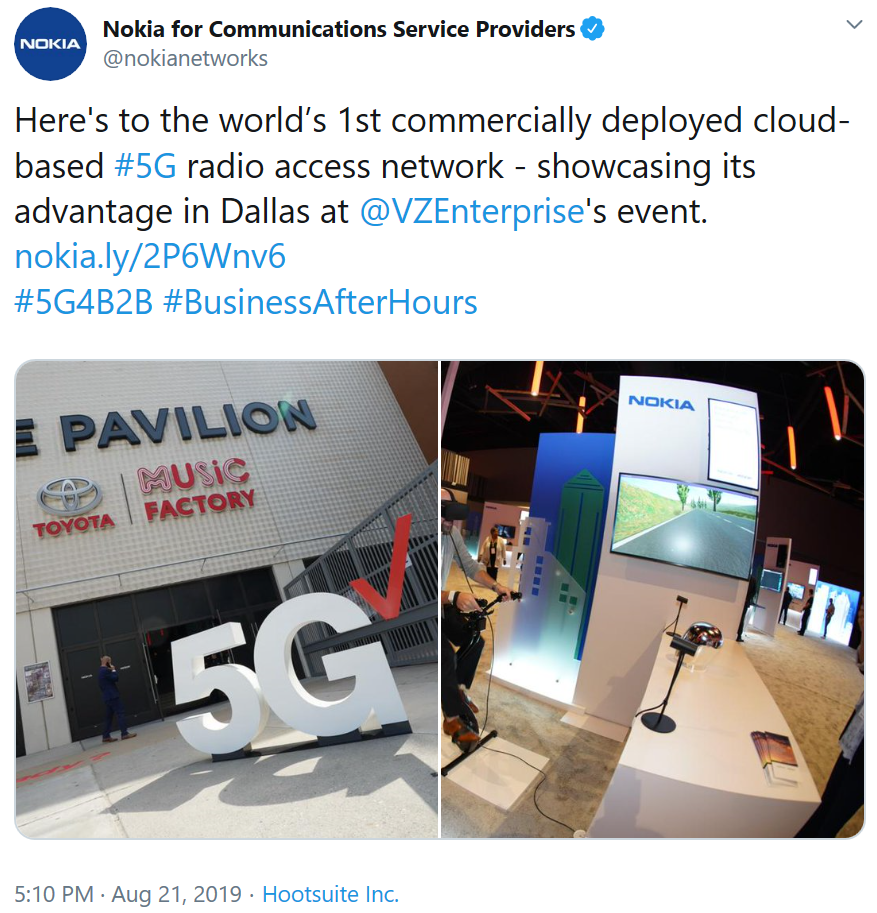 According to Mark Atkinson, who heads up the 5G and small cells business unit within Nokia’s Mobile Networks Business Group, “Cloud RAN is key to achieving higher scalability and a more agile business. As service providers deploy 5G, they will face the need to extend their subscriber base and offer new types of services to address the enterprise market, particularly those in the industrial sectors, where performance and reliability is key,” he wrote in a blog post.

He continued: “This is a significant achievement and sets the stage for further innovations. Cloud RAN is key to achieving higher scalability and a more agile business. Innovation speeds up as software cycles become more rapid, so new services are rolled out faster [ … and] improving operational efficiency and retaining maximum flexibility to meet unpredictable demand in dense areas.

“As service providers deploy 5G, they will face the need to extend their subscriber base and offer new types of services to address the enterprise market, particularly those in the industrial sectors, where performance and reliability is key,” he wrote, saying that cloud RAN provides a platform for innovations to serve those sectors.

Atkinson went on to say that the 5G cloud RAN implementation was enabled by Nokia’s cloud base station, which “splits traffic to ensure each connection gets the service it needs.” Describing the architecture, Atkinson said that time-critical functions are processed at the cell site by distributed units connected via Ethernet fronthaul, while a centralized control unit “performs non-real-time functions fully virtualized and more cost-effectively in a centralized data center.

“This flexible mix of local and cloud-based processing is a real game changer,” he added. “This means that we can combine performance, scalability and efficiency at its best – in the radio unit (RU), distributed unit (DU) and centralized unit (CU).”

April 8, 2022 Dear Pennsylvania Wireless Association Members: As most of you are aware, PWA has a Regulatory/Legislation Committee. Through this committee, we have a unique opportunity to … END_OF_DOCUMENT_TOKEN_TO_BE_REPLACED