The Sunday Brief: What matters in wireline – Enterprise expense management and extinction 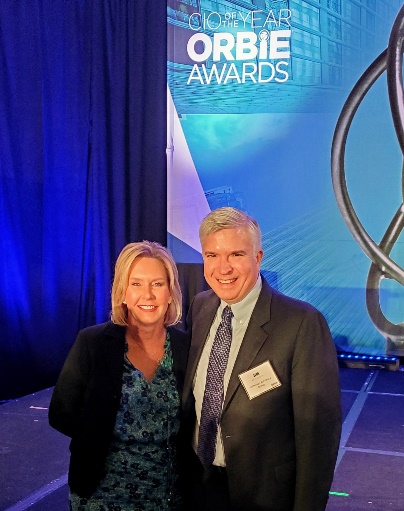 Greetings from the Queen City, where the IT scene is red hot even though cooler fall temperatures have finally arrived. I was pleased to be the guest of San Mateo-based Aryaka Networks at the 2019 Orbie (CIO of the Year) awards on Friday.  It was great to catch up with many folks in attendance including Karen Freitag (pictured), a Sprint Wholesale alum and the Chief Revenue Officer at Aryaka.

This week, we will dive into drivers of wireline earnings.  At the end of this week’s TSB, we will comment on several previous briefs (including the AT&T Elliott Memo fallout) in a new standing section called “TSB Follow Ups.” We close this week’s TSB with a special opportunity for reader participation.

One of my favorite things to write about in the TSB is wireline – that forgotten side of telecom and infrastructure that serves as the foundation for nearly all wireless services.  Wireline is a case study in competition, regulation, cannibalization, innovation, and a few other “-tions” that you can fill in as we explore the following dynamics:

To be fair to the telcos, all of 2018’s losses can be attributed to two carriers: CenturyLink and Frontier.  We have been through the Frontier debacle twice in the last three months and will not retrace our steps in this week’s TSB (read up on it here).

But CenturyLink is a different story, with losses coming in areas like Phoenix (where Cox is lower priced), Las Vegas (Cox lower priced except for 1Gbps tier), and legacy US West areas like Denver/ Minneapolis/ Seattle/ Portland (Comcast has lower promotional pricing).  Even as new movers are considering traditional SVOD alternatives like Roku and AppleTV in droves, there’s a perception that the new CenturyLink fiber product is not worth the extra cost.

A good example of the perception vs reality dichotomy comes from the latest J.D. Power rankings for the South Region: 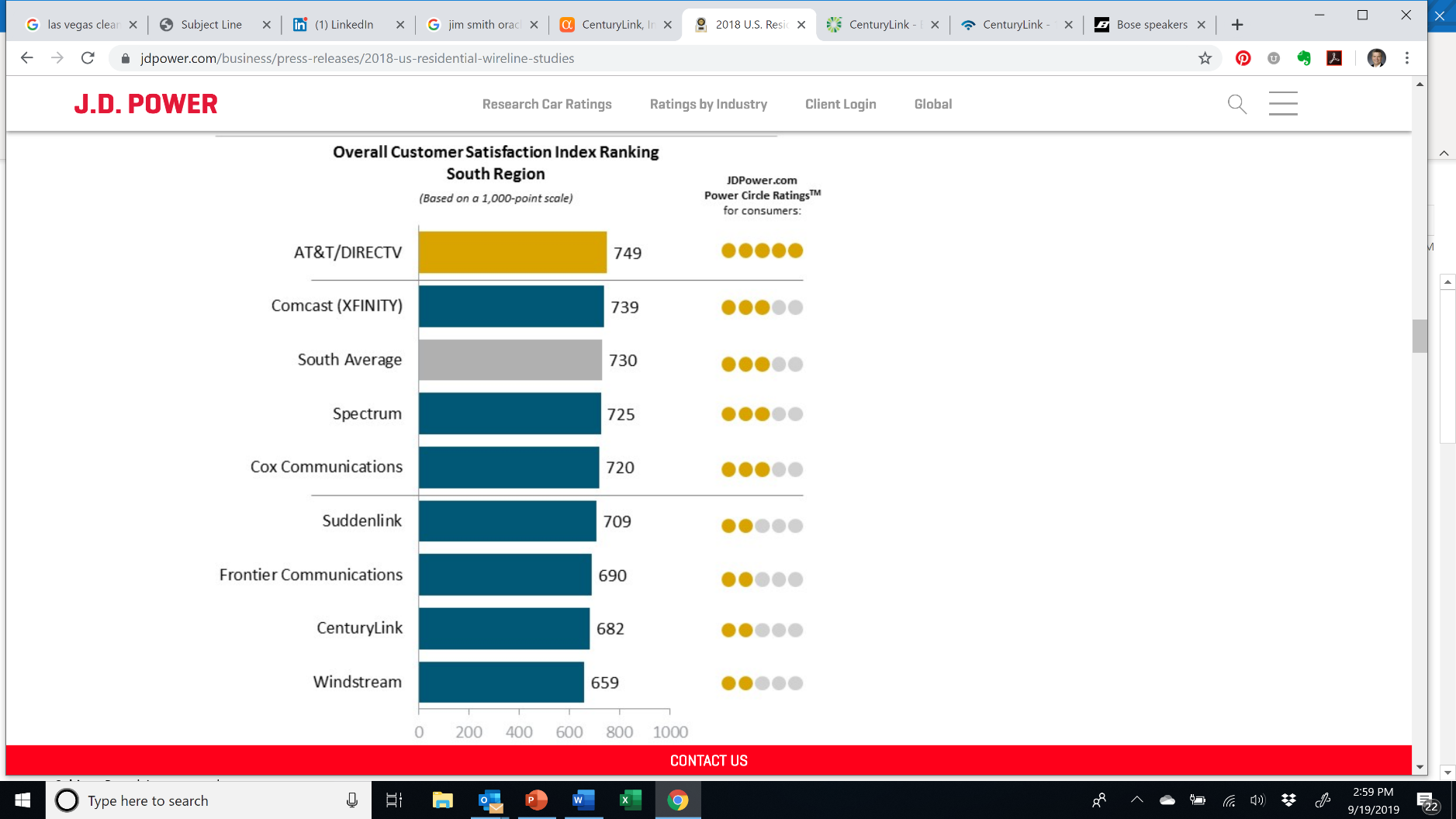 But superior customer satisfaction (749 is a decent score for telecom or wireless providers regardless of product) does not guarantee market share gains.  AT&T (Bell South) has continued to improve its fiber footprint, invested heavily in retail presence, and improved the (self-install) service delivery experience.  Even with that, it’s highly likely that AT&T’s South region lost market share to Comcast (2nd place) and Spectrum (4th place).  Why is a three-circle product outperforming a five-circle product?

The answer lies in several factors:  Value (see comments above about promotional pricing and go to www.broadband.now for additional information), Bundled products (which links back to value – bundle cost may be significantly cheaper), and Legacy perceptions (DSL overhang mentioned above, tech support overhang, install overhang).

For more details, let’s look at two very fast-growing areas:  Dallas, TX and Hollywood (Miami), FL.  Nearby is a chart showing online promotional pricing for AT&T, Spectrum (Charter) and omcast. There are some differences on contract term (AT&T has contracts in Dallas; Spectrum does not. Comcast has a 2-yr term with early termination fees to get the $80/ mo. rate for their triple play in Miami). Both zip codes selected above have over 50% served by AT&T fiber. AT&T is more competitively priced than Spectrum in Dallas, and extremely competitive with Comcast especially at the mid-tier Internet only level (promotional rate gigabit speeds are $70/ month with no data caps).

With superior overall customer satisfaction and competitive pricing, why does AT&T continue to tread water on broadband and lose TV customers? Are cable companies out-marketing Ma Bell? Is there a previous AT&T experience overhang? Are AT&T retail stores creating differentiation for AT&T Fiber (compared to minimal showcase store presence for Spectrum or Comcast)?

2.Enterprise spending – Did it return to cable instead of AT&T/ Verizon/CenturyLink?  We commented last week on AT&T’s expected gains in wireless enterprise spending thanks to the FirstNet deal.  How that translates into wireline gains is an entirely different story.  Here’s the AT&T Business Wireline picture through 2Q 2019: 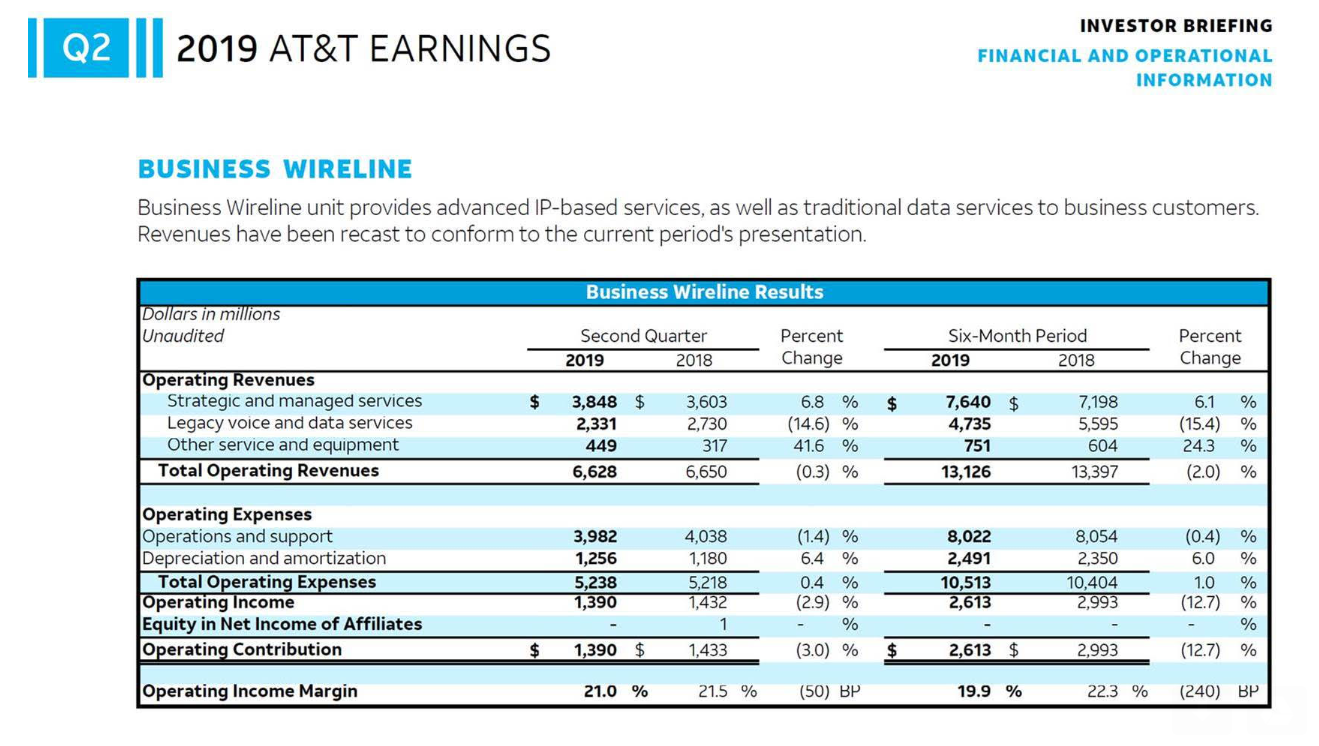 While these trends are not as robust as wireless and operating income includes a $150 million intellectual property settlement, AT&T management described Business Wireline operating metrics as “the best they have seen in years.” What this likely indicates is that AT&T’s legacy voice and data service revenue losses (high margin) are beginning to decelerate (at 14.6% annual decline, that’s saying a lot – Q1 2019 decline was 19.2% and the 2Q 2017 to 2Q 2018 decline was 22.0%!).

Meanwhile, Comcast Business grew 2Q 2019 revenues by 9.8% year over year and is now running an $8 billion run rate (still a fraction of AT&T Business Wireline’s $26.5 billion run rate but a significant change from Comcast’s run rate in 2Q 2016 of $5.4 billion). Spectrum Business is also seeing good annualized growth of 4.7% and achieved a $6.5 billion annualized revenue run rate. Altice Business grew 6.5% and is now over a $1.4 billion annualized revenue run rate. Including Cox, Mediacom, CableOne and others, it’s safe to say that cable’s small and medium business run rate is close to $13 billion (assuming 33% of total business revenues come from enterprise or wholesale). That leaves a consolidated enterprise and wholesale revenue stream of ~ $5.5 billion which is more than twice Zayo’s current ARR.

The business services divisions of cable companies are repeating the success of their residential brethren. They are aggressively pricing business services, using their programming scale to grab triple play products in selected segments such as food and beverage establishments and retail/ professional offices. And, as Tom Rutledge indicated in last week’s Bank of America Communacopia conference, they are starting to sign up small business customers for wireless as well. I would not want to be selling for Frontier, CenturyLink or Windstream in an environment where cable had favorable wireless pricing and the ability to use growing cash flows to build a competitive overlay network.

Enterprise and wholesale gains are important for several reasons. In major metropolitan areas, segment expansion gets cable out of the first floor (think in-building deli or coffee shop) and on to the 21st floor. To be able to get there, cable needed to have a more robust offering. Comcast bought Cincinnati-based Contingent services in 2015, and Spectrum also improved its large business offerings. They are not fully ready to go toe-to-toe with Verizon and AT&T yet, but with some help from the new T-Mobile (all kidding and previous John Legere lambasting aside, a new T-Mobile + cable business JV would make perfect sense), things could get very difficult for the incumbents.

Moving up in the building is important, but there’s another reason to expand from the coffee shop: CBRS (if you are new to TSB, the link to the “Share and Share Alike” column is here). Given that 2-3 Gigabytes/ subscriber of licensed spectrum (non-Wi-Fi) capacity are consumed within commercial offices per month, there’s a ready case for MVNO cost savings as Comcast, Altice, and Spectrum Mobile continue to grow their wireless subscriber bases.

Further, since many enterprises are going to be introduced to LTE Private Networks soon, there’s a threat that Verizon and AT&T (and Sprint if the T-Mobile merger closes) stop provisioning cable last mile access out of their regions and only provision wireless access. As we have discussed in this column previously, the single greatest benefit of 5G LTE networks is the ability to control the service equation on an end-to-end basis for branch/franchise locations. It represents a compelling reason to move to SD-WAN, and allows cable to deepen its fiber reach and build more CBRS (and future spectrum) coverage.

Bottom line: Cable continues to grab share in small, medium, and enterprise business segments as they move from connecting to the building to wirelessly enabling each building. CBRS presents a very good opportunity to do that. Even with cable’s entre into the enterprise segment, it will still be dominated by AT&T (with Microsoft and IBM as partners) and Verizon for years to come.

That’s why reducing operating expenses is not a spreadsheet exercise – operating in a territory originally engineered for 80-90% market share that is now at 30-40% share requires increased efficiency. Connecting to neighborhoods is hard and connecting through neighborhoods to individual homes is even harder. Combine this with a change in technology (fiber vs twisted copper) ratchets the degree of difficulty ever higher.

One of the great opportunities for all communications providers is using increased computing (big data) capabilities to quickly troubleshoot issues and recommend remedies. For example, customers who go online or contact care and are “day of install” should have a different customer service page than someone who has been a 4-month regular paying customer or a 2+ year customer who is shopping around.

There’s no doubt that the online environment has been improved for every telco, and also no doubt that many more issues in the local service environment require physical inspection and troubleshooting. But when telcos move to correctly predicting customer needs through online help 95+% of the time, the call center agent will go the way of the bank teller and the gas pumper: Convenience and correct diagnosis will trump in-person service.

For those of you who are regular followers of TSB and read last week’s column, there’s also the issue of territory dispersion. Without retreading the information discussed last week, one has to ask if there are trades to be made in the telco world (or spinoffs) that make sense to do immediately (Wilmington, North Carolina, a legacy Bell South and current AT&T property would be a good example using last week’s map).

Bottom line: There won’t be any dramatic changes to the wireline trends – yet. But, as 5G connectivity replaces cable modems and legacy DSL (particularly to branch locations) and as cable expands its fiber footprint to include in-building and near-building wireless solutions (starting with CBRS), the landscape will change. And there will be a lot of stranded line extensions if wireless efforts are successful.

Sharing can work, but it takes a lot to do it. The value has to be clearly present to increase carrier attention and participation.

Next week, we will cover some additional earnings drivers. Until then, if you have friends who would like to be on the email distribution, please have them send an email to sundaybrief@gmail.com and we will include them on the list.

One last request – we are currently on the hunt for some of your favorite titles that chronicle telecom/ tech history. No title is off limits. Currently, we have three that have made the cut:

The post The Sunday Brief: What matters in wireline – Enterprise expense management and extinction appeared first on RCR Wireless News.

Letter from the President Greetings PWA Members! I am very happy to be serving as the PA Wireless Association President this year. I look forward to hosting our 2021 events and supporting our … END_OF_DOCUMENT_TOKEN_TO_BE_REPLACED