The Sunday Brief: Three up and comers 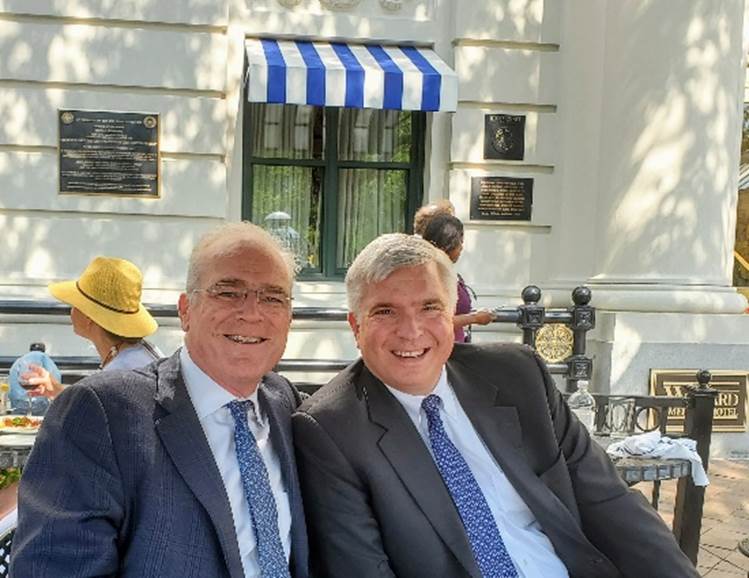 Greetings from Charlotte/Davidson, Norfolk/ Virginia Beach, Washington DC/ N Virginia, and Dallas/ Ft. Worth (picture is yours truly with Federated Wireless BoD member Tim McDonald).  This week’s TSB will focus on several start-ups that we think deserve attention.  We will also have several TSB Follow-Ups.

Three up and comers

Identifying disruptive telecom start-ups is a challenging topic to say the least, and we recently covered one, Federated Wireless, with its $51 million C-round raise.  Given high infrastructure barriers to entry, new fiber and service providers are scarce.  We will highlight a few companies who are bucking the trend and could challenge incumbents:

Starry was the brainchild of Chet Kanojia, who was also the lead for TV-streaming service Aereo which sold to Tivo in a fire sale after losing a court case (relive that 2014 moment through this Ars Technica article).  Starry currently uses 38 GHz (LMDS) spectrum to offer their service and uses a Starry Point rooftop connection and existing inside wiring to bring connectivity to individual customers (see pic below). 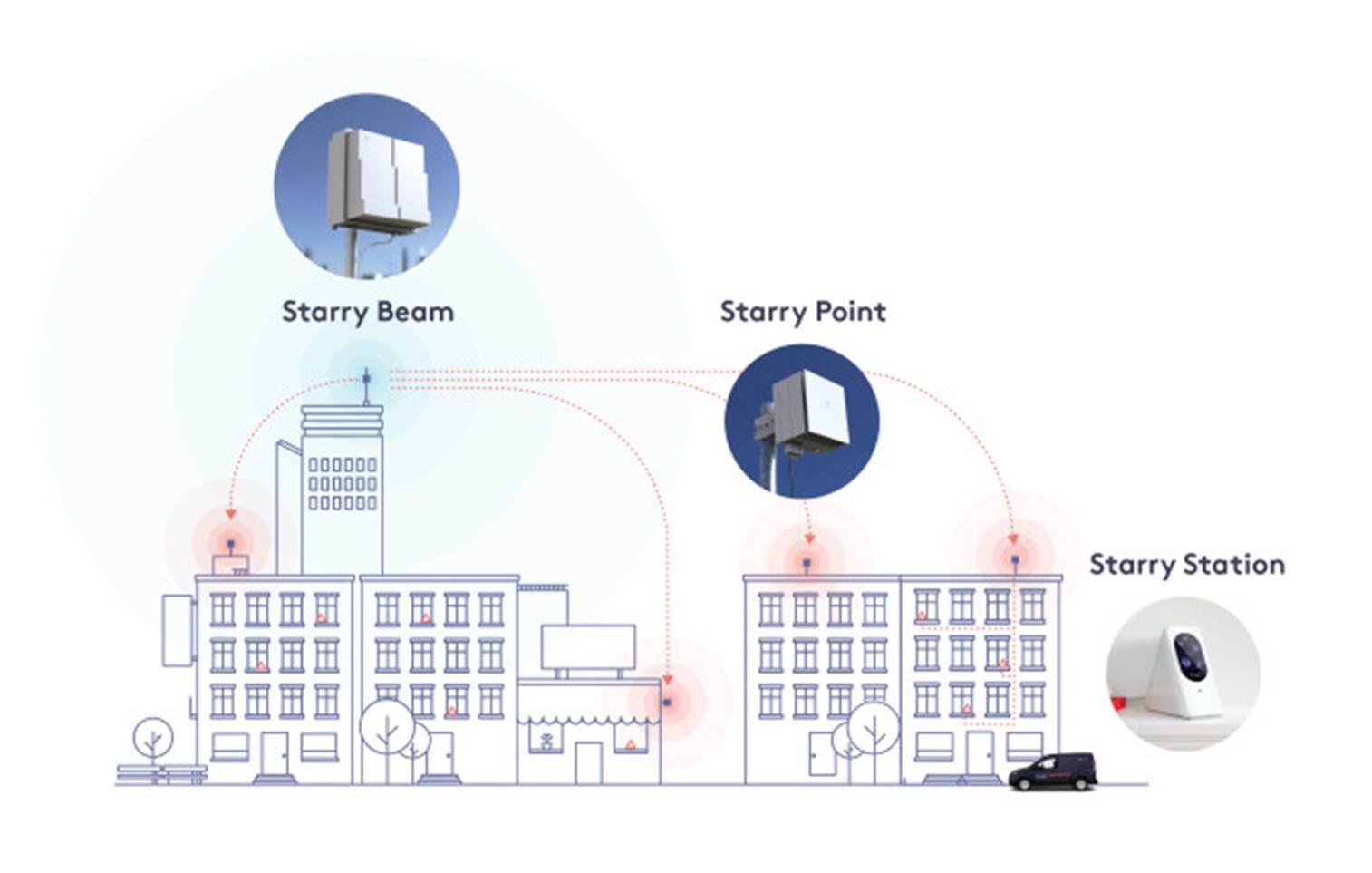 Per their website, Starry is currently offered in New York, Los Angeles, Boston, Denver, and Washington DC.  Starry announced plans to expand to 13 additional LMDS-based markets including Chicago, Cleveland, Seattle and Indianapolis (total of 18) but there have been no public announcements of new launches.

Bottom line:  Starry is an intriguing company and using 802.11ax (Wi-Fi 6) is an extremely wise technology choice.  Their focus on gaining ~ 20 million total customers through Multi-Dwelling Units keeps them focused.  Oppenheimer recently conducted an analysis which indicated that Starry should be able to keep to their $20/ home passed capital number.  The company becomes even more valuable as 5G stand-alone radios emerge at lower price points.

However, Google is slowly but surely entering this market through their Webpass subsidiary (see Austin expansion announcement here).  The very early reaction to T-Mobile Home has been nothing short of ecstatic (see Light Reading article here), and Verizon and AT&T will be increasing their speeds and associated offerings.  The market is about to get very crowded for fixed wireless and bundling with mobile services is likely to be the norm.  This may make a $50 for 200 Mbps stand-alone offering more difficult to stomach. 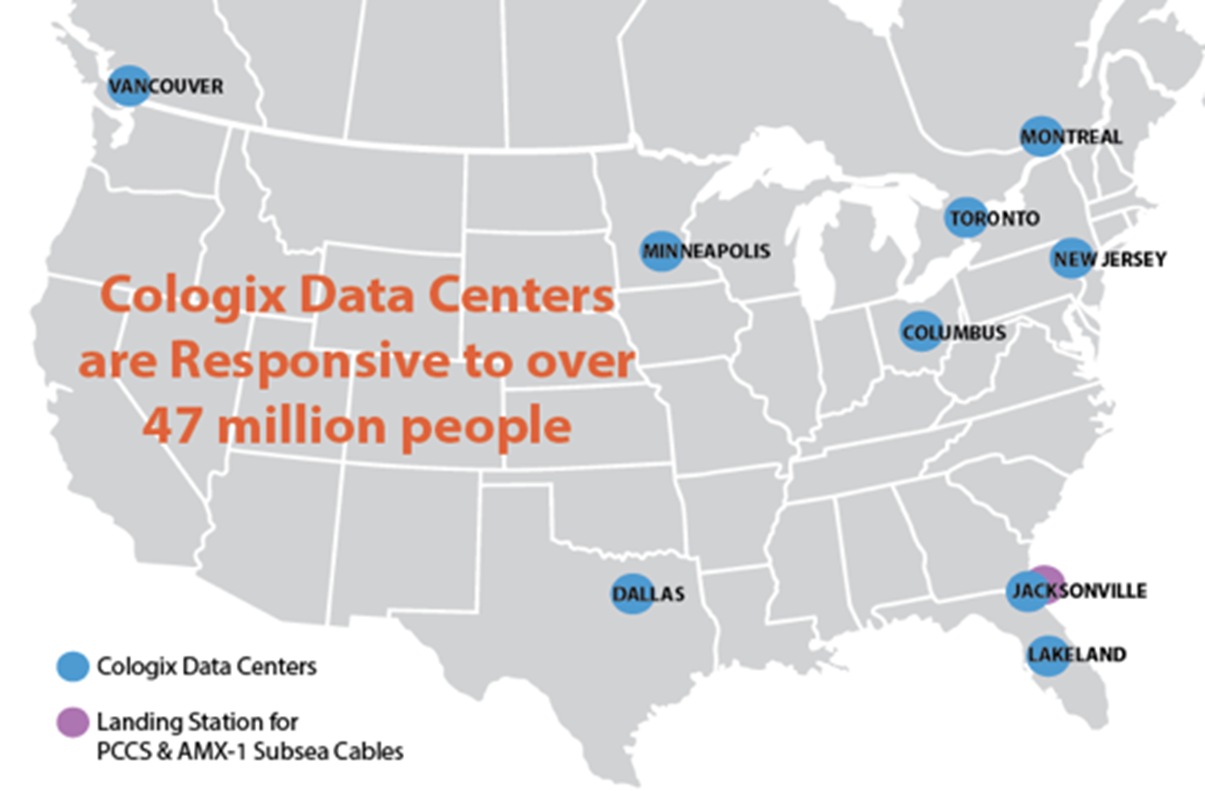 Cologix is a neutral-host data center company operating across 10 North American markets (32 total data centers).  Per their website, half of the 32 are located in Montreal, Toronto and Vancouver.

As the map shows (note; an updated version of this map would include Ashburn, VA), they have a relatively unique focus, with presence in Dallas but not Houston/ Austin/ San Antonio, Minneapolis but not Chicago, Jacksonville/ Lakeland but not Miami, Tampa or Atlanta.  And no Phoenix, Los Angeles, Seattle/ Portland, or Silicon Valley.  A good way to summarize their market footprint is “deep over wide.”  Stonepeak, who also owns Vertical Bridge (wireless infrastructure) and Extenet (in-building and small cell infrastructure provider) is a very large infrastructure fund with top-tier management.

Their Sept 23rd announcement resonated across the data center industry: $500 million to expand, and Stonepeak would not lose their ownership stake in Cologix.  Having grown considerably through acquisition, Cologix now has the capital to add several more markets to its footprint.

The biggest question at this point is “What price?”  Public valuations in the data center space have widely recovered from 2017/2018 levels, and Stonepeak is not an “at any costs” private equity firm.  To gain scale, they could go smaller market (taking a stake in a company like EdgeConnex who has a complementary global footprint) or focus on a few leading data center assets such as Switch (a large acquisition), Tierpoint or Flexential (both easier to stomach acquisitions).

Bottom line:  Cologix is a compelling story with a good management team and dense second-tier locations.  Acquisition selection and integration determine whether they rise to the level of global mega-players such as Equinix and Digital Realty Trust.

One of the most interesting start-ups to challenge the status quo in the last decade is Helium.  I first got to know the company about a year ago while I was doing some research on low-powered networks.  The company was still in pre-launch and going through capital like mad, so I basically left them for Silicon Valley dead even through they had powerful founders (Shawn Fanning of Napster fame) and investors (see above). 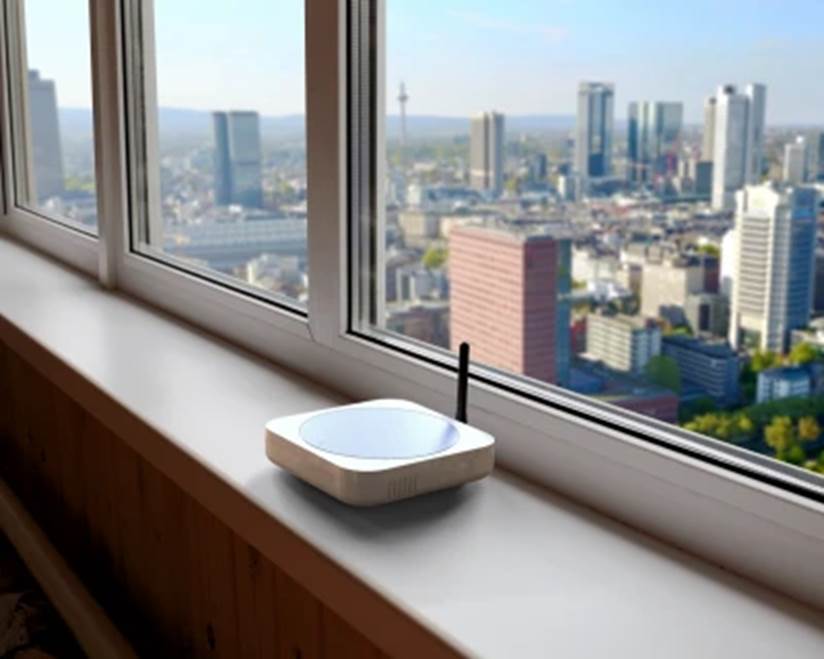 The company asks current broadband customers to plug something called a Helium Hotspot into their current wireless router (it also requires AC power, but its website claims the Hotspots consume as much power as a lightbulb).  Each Heluim Hotspot costs $495 and customers are paid for their value added via a cryptocurrency called Helium (more on this in the Helium blogpost here which includes a revaluing of the currency).

Approximately 100-200 well-placed Hotspots are required to blanket most cities (Austin, Helium’s first fully launched market, required ~100, but there are another 110 active to make the network as robust as possible).

Helium uses the 900 MHz network in the United States.  This network is open and available for low-power transmission (5 Kbps).  There are many current device applications for Helium (Lime scooters, dog collars, water cooler levels, bikes, in-building air quality, and trackers of all shapes and sizes) and this list promises to grow.

Because of the low bandwidth requirements, Helium will not drive broadband users over a cap.   But the value of the service (crypto is hard to explain) needs to be targeted.  What’s most interesting about the service is that if Helium can achieve connectivity on a large scale (and it likely can do so very quickly after a few trials), new IoT inventions will not be constrained by high connectivity costs.

Bottom line:  The 900 MHz spectrum band has been fallow for some time, and Helium (and Amazon Sidewalk) are now going after it in a big way.  Helium has a first-class team and, according to early reviews of the service, has developed an easy to provision/ install, easy to track interface.  While they have not raised as much money as the other companies discussed in this TSB, they may have the fastest path to market dominance.

There are dozens more companies to cover, but these three stuck out as ones that could alter the addressable markets of traditional infrastructure and communications companies.  We welcome your thoughts and ideas for additional companies to cover in the future (using a $50 million minimum funding rule as the deciding factor for inclusion).

1. T-Mobile/ Sprint Merger has their third vote, and a key state (Florida) signs on to the Department of Justice consent decree.  Late last Friday, Bloomberg reported that a third commissioner (Carr) had voted for the merger, and that neither of the Democrat commissioners had yet cast a vote.  It is likely that a formal vote will occur prior to October 16, though many associations have called for the Commission to delay their vote until allegations of Sprint’s wrongdoing with respect to subsidy payment violations have been fully vetted.

In addition to this good news heading into the weekend, the merger also received a boost from Florida Attorney General Ashley Moody, who announced that the Sunshine State had signed on to the terms of the DOJ consent decree.  Kansas, Nebraska, Oklahoma, South Dakota, and Ohio were the original states to sign the July 26 decree, and Louisiana has also joined since then.  It will be interesting to see which additional states join the DOJ or the 18 states (and District of Columbia) suing to block the merger.

2. There was a major ruling upholding much of the Net Neutrality provisions this week, with additional activity likely pushed back to states.  Here’s an excellent article summarizing the D.C. Court of Appeals decision from the New York Times.  If you would like to read the decision in its entirety, it’s here.  If you would like to read Roger Entner’s take on the decision (I agree with his take), it’s here.  I have not read the full transcript of the Court’s decision, but promise to comment on it more this week.

3. In a surprise move, Apple requested a 10% increase in iPhone 11 and iPhone 11 Pro production.  A good article summarizing their decision is here.  TSB readers who fully digested last week’s issues are not surprised.  I have attached the latest changes in inventory to the TSB and will post more on this on the web version (www.sundaybrief.com).  T-Mobile appears to have the greatest backlog, which, as we noted last week, is surprising given their upfront deposits on the iPhone 11 and iPhone 11 Pro Max.

Many thanks to those of you who suggested additional titles for the History of Technology.  As of Saturday, October 5, we have the following 10 recommendations:

We will publish a final list at the end of October.  Please get your entries in by October 25 by sending an email to sundaybrief@gmail.com or responding to this LinkedIn post.

Next week we will cover additional industry events and news of the week.  Until then, if you have friends who would like to be on the email distribution, please have them send an email to sundaybrief@gmail.com and we will include them on the list.

The post The Sunday Brief: Three up and comers appeared first on RCR Wireless News.

April 8, 2022 Dear Pennsylvania Wireless Association Members: As most of you are aware, PWA has a Regulatory/Legislation Committee. Through this committee, we have a unique opportunity to … END_OF_DOCUMENT_TOKEN_TO_BE_REPLACED