Greetings from Charlotte, North Carolina (picture is, from left, Frank Cairon, formerly of Verizon Wireless and Ryan Barker, currently with Verizon Wireless enjoying some good Mexican food on Friday in the Queen City with yours truly).

This week’s TSB examines the short-term dynamics that could impact wireless growth in the third quarter and through the end of the year.  At the end of this week’s TSB we will also briefly examine the current state of litigations and investigations active and pending (T-Mobile/ Sprint, Facebook, and Google).

Before diving into earnings drivers, a quick shout out to Federated Wireless, who raised $51 million this week in a mammoth C Round financing (full announcement here). Existing investors American Tower, Allied Minds, and GIC (Singapore sovereign wealth fund) all participated in the round, and Pennant Investors (Tim McDonald, formerly of Eagle River (Craig McCaw), will be joining the Federated board) and SBA joined with fresh cash. Kudos to Federated CEO Iyad Tarazi for his continued leadership and perseverance. With $51 million in additional cash, spectrum sharing gets a global boost.

In addition to this news, the FCC also has placed the approval and scheduling of the Private Access License auction (this is the dedicated band that gets priority over the General Authorized Access band) on the docket for June 2020 (FCC Commissioner Pai’s blog post is here). It’s generally assumed that this means a C-Band auction will come at the end of 2020/ beginning of 2021 (although this week’s news that Eutelsat has withdrawn from the C-Band Alliance has some believing that there may be a side deal afoot). The PAL auction timeline is in line with expectations, and it’s likely participants will include some new(ish) entrants.

Speaking of expectations, there’re not a lot of dramatic changes expected in the wireless arena.  Consensus has T-Mobile leading the postpaid phone net additions race (no surprise), with Sprint struggling to keep pace, AT&T in the 0-300K range for postpaid phone thanks in large part to FirstNet gains, and Verizon, excluding cable MVNO revenues, growing their retail postpaid phone base only slightly.  With the exception of FirstNet (and a few quarters of decent Verizon growth), this is a pretty consistent story dating back to early 2017.  What events could change the equation and dislodge the current structure?

“We had some AWS-3 and some WCS spectrum that we had, so to speak, in the warehouse that we hadn’t deployed. We had 700 spectrum, Band 14 from FirstNet, which the government was requiring us to deploy. And then we got a whole new set of technologies that were coming out, 256 QAM and 4-way MIMO and carrier aggregation. They were particularly important to us because of our diverse spectrum portfolio. So we got the FirstNet contract and we had to touch a tower, have to go out on the network. And we decided, with this contract, now is the time to, so to speak, do everything. Put all the spectrum in service, that’s the 60 megahertz. In some towers, it’s 50, some towers, it’s 60, but it’s 60 megahertz of new spectrum that was generally unused that we’re putting in.”

This has the effect of increased costs, but also improved network performance.  With 350,000 net additions already from FirstNet (Stephens disclosed this in the same conference), it’s entirely possible that they could post a 100K net add surprise due to increased coverage and deployments.  In turn, improved wireless bandwidth, while driving up costs, should lower churn in areas like Detroit (RootMetrics overall winner in a tie with Verizon – first since 2012), and Boston (first RootMetrics overall win in Bean Town since 2017).

2. Faster cable MVNO growth.  While this week’s news was on Altice’s aggressive $20 unlimited price point for existing customers (great analysis on their strategy here), both Charter and Comcast see a lot of mover activity in the third quarter.  This would seem to be a very good time to present their wireless offer.  Here’s a chart of net additions by both Charter and Comcast for the past two years: 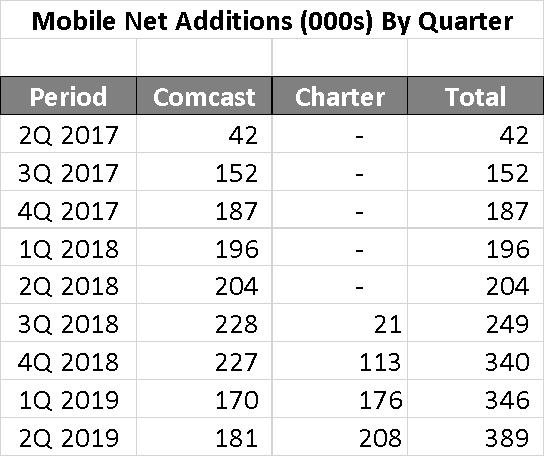 While the two largest cable providers accounted for ~390K growth in 2Q (and over 1.3 million net additions growth over the last four quarters), there’s a strong likelihood that this figure could grow even greater as the attractiveness of the wireless bundle pricing takes effect.   Both Spectrum and Comcast are maturing their service assurance processes, and those efforts should lower churn.

Comcast also made a number of changes to their “By the Gig” plans which encourage this option for multi-line plans that use 2-6 Gigabytes per line per month (and therefore use a lot of Xfinity Wi-Fi services).  It basically amounts to a prepayment for overage services, but could be attractive for certain segments/ demographics (full details on these offer changes are here).  Charter did not follow the Comcast changes described in the link and their “By the Gig” pricing continues to be $2/ mo / gigabyte higher.

Both Comcast and Charter are running into Apple iPhone announcement headwinds if next week’s headlines meet expectations (no 5G, no CBRS, no special financing deals, better camera).  If the changes do not increase willingness to upgrade/ change to an iPhone, it’s going to be very difficult to craft a cable plan (even $20/ mo.) that will buck the trend.  The upgrade cycle will be extended to 4Q 2020, when both the carriers and Comcast/ Charter will have full access to 5G.

Our prediction is that Charter and Comcast will have 475-500K net additions in the third quarter thanks to a combination of lower churn and higher gross additions (led by increased moving activity).  Altice’s offer will add another 70K net additions in September, with those gains coming from Sprint retail and, to a lesser extent, T-Mobile retail and wholesale (Tracfone).

3. T-Mobile’s 600 MHz coverage (and gross add) improvements.  As T-Mobile, Sprint, and the state Attorneys General try to find a resolution to their quagmire, T-Mobile keeps on deploying 600 MHz spectrum.  Here’re their reported (through Q2 2019) and estimated (Q3/Q4) progress:

Every new device on the T-Mobile.com website (and every T-Mobile store) is 600 MHz/ LTE Band 71 capable.  Many older devices are not, however, and that is preventing greater market share gains in secondary and tertiary geographies (many/ most BYOD Android devices from AT&T, for example, will have the 700 MHz but not have the 600 MHz band).  The expected Apple announcement represents a slight headwind for T-Mobile as well.

There’s a natural gross add/ upgrade path that follows 145 million coverage growth over a 12-month period.  Assuming T-Mobile keeps their churn rate at 0.8%/ month over 3Q (2.4% of the ending branded postpaid 2Q base would be ~1.07 million disconnections), they have grown their 600 MHz marketable base by 20 million from Q1 to Q2 and by another 50 million from Q2 to Q3.  If they just grew their penetration in the 600 MHz band by 1.5% for Q1-Q3 incremental POPs (or 0.5% penetration for the entire estimated 3Q 2019 footprint), they would negate the entire estimated branded postpaid churn for the rest of the country.  This ex-urban/ rural growth opportunity is unique to T-Mobile and would at the expense of AT&T and Verizon.

Offsetting the 600MHz growth is small cell progress.  T-Mobile committed at the beginning of the year to deploy 20,000 incremental small cells in 2019, but that guidance was withdrawn in their Q2 Factbook with H1 growth of only 1,000.  That leaves a very large backlog of in-process capital (excluding capitalized interest, total capital spending was $3.48 billion vs an estimated spending range at the high end of $5.4 – $5.7 billion).  T-Mobile should spend at least $2.2 billion in capital spending in the second half of 2019 on 5G, 600 MHz, and other initiatives and will undoubtedly be left with a lot of in-process small cell deployments.

4. Sprint’s prepaid and postpaid churn.  There’re a lot of headwinds for Sprint in the third quarter – overall 2Q churn trends are higher than previous year’s, and no one expects the seasonal respite to last long.  It’s likely that 3Q postpaid churn could exceed 1.85%, led by postpaid phone churn of a similar level (look for late September promotional activity).

Prepaid churn is a bit tougher to forecast and will also be tracked closely.  If the postpaid churn comes in below 2Q levels, check the prepaid recategorizations to postpaid (they were 116K in Q2 and 129K in Q1).  Both prepaid and reclassified postpaid accounts will be transferred to Dish assuming the merger goes through, but it makes the postpaid headline number more palatable.

The 30-day guarantee promotion, according to most reports, has been an ineffective switching tool.  (Sprint’s 5G rollout success has been much more impactful).  Expect Sprint to say very little until there is clarity on the litigation, and to post greater than expected losses in prepaid subscribers as they preserve their marketing dollars for a post-merger world.

Litigation tracker:  Why the Facebook, Google, and T-Mobile/ Sprint cases are not all the same

Speaking of litigation and investigation, we were very dismayed that media sources are choosing to lump the New York-led Facebook investigation announced Friday, the to be announced Texas-led Google investigation, and the on-going T-Mobile/ Sprint (TMUS/S) litigation into one mega-story.  While there are some similarities, the upcoming Google action is broader than Facebook and more bipartisan than the TMUS/S complaint.

As most of you who are following the TMUS/S suit know, the states of Oregon and Illinois recently joined the original 14 states and the District of Columbia to block the merger.  (As an aside, Fox Business is reporting that the state AG group is focusing on the inexperience and shaky financial condition of Dish Networks as opposed to what would have been an uphill market concentration battle).  In fact, in the original TSB concerning the lawsuit (here), we were surprised by the absence of Illinois.  The figure below shows who is involved in what (underlined states are named in the Facebook litigation):

To recap, there are 40 states + the District of Columbia named in the National Association of Attorneys General comment letter to the FTC (filing here), and at least 30 of them are joining a Texas-led lawsuit against Google to be announced early this week.

As we stated in the TSB on the AG lawsuit, very few sparsely-populated states, regardless of political affiliation, are participating in the T-Mobile/ Sprint litigation.  Fourteen of the fifteen least densely populated states in the US (data here) are named in the Google/ FTC letter.  However, only two of the fourteen (Colorado, Oregon) are participating in the TMUS/S litigation.  The promise of a rural solution outweighs the benefits of a fourth carrier in metropolitan and suburban areas.

The Facebook investigation is also widely bipartisan with five Democrats and four Republican states represented.  Florida is involved in the Facebook investigation but none of the other two legal activities.  In addition, there are nine states (including New Jersey, a Democrat stronghold) that are not currently participating in any legal activity.

Bottom Line:  Concerns about Google’s anti-competitive practices are supported by a large number of state Attorneys General and are very bipartisan.  A subsegment of Democrat AGs (and TX) is also a part of the T-Mobile/ Sprint lawsuit.  And an even smaller subsegment plus Florida is a part of the recently announced Facebook investigation.

Next week, we will highlight some wireline trends and talk about overall profitability across the telecommunications sector.  Until then, if you have friends who would like to be on the email distribution, please have them send an email to sundaybrief@gmail.com and we will include them on the list.