HAPS Mobile is a joint venture formed in late 2017 by Sprint parent company SoftBank and California-based AeroVironment; SoftBank owns 95% of the company. It focuses on developing solar-powered unmanned aerial vehicles as a basis for high-altitude networks to provide connectivity.

According to documents filed in support of Special Temporary Authority for testing, granted by the Federal Communications Commission today, HAPS Mobile will be conducting tests based on the Hawaiian island of Lanai, where it already has U.S. Federal Aviation Administration permission to operate in the stratosphere. The tests will focus on determining the HAPS’ ability to maintain a stable service link over Lanai, transmitting LTE signals from a ground station to the UAV. 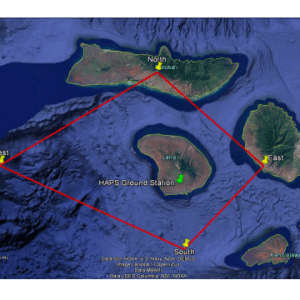 HAPS Mobile plans to operate its solar-powered UAV above 15 kilometers and below 24.4 Kilometers in elevation. It outlined four areas for testing:

-Testing the optimal link budgets for LTE service via HAPS

The 180-day testing period begins November 1. Sprint requested confidentiality from the FCC for some aspects of the test equipment and activities, citing competitive concerns.

In August, HAPS Mobile’s solar-powered Hawk30 UAV received a certificate of authorization from the FAA to operate in the stratosphere above Lanai. The UAV company has been working with the University of Alaska Fairbanks (which runs the Pan-Pacific UAS Test Range Complex and applied for the authorization) and the University of Hawaii on stratospheric test flights above the island. Now, it has the ability to utilize Sprint’s spectrum in those tests. 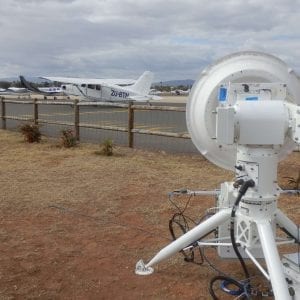 Image: Equipment from a HAPS Mobile demo with Facebook. Courtesy of HAPS Mobile

Separately, HAPS Mobile is also working with Facebook on HAPS communications networks and joined in a flight demonstration earlier this month in Oudtshoorn, South Africa. In that demo, a small, general aviation airplane was equipped with a communications system from Facebook that used 26 GHz and 38 GHz spectrum, and it flew at an altitude of 4 kilometers. The test was described by the two companies as a collaboration “to accelerate the development and adoption of HAPS communication technologies.”

HAPS Mobile has also invested $125 million in Google’s Loon earlier this year as part of a collaboration effort, with HAPS Mobile, Loon and SoftBank looking at the possibilities of wholesale arrangements, jointly-developed communications payloads that could use multiple HAPS vehicles and spectrum bands, and “creating an alliance to promote the use of high altitude communications solutions with regulators and officials worldwide.”

April 8, 2022 Dear Pennsylvania Wireless Association Members: As most of you are aware, PWA has a Regulatory/Legislation Committee. Through this committee, we have a unique opportunity to … END_OF_DOCUMENT_TOKEN_TO_BE_REPLACED