With keynotes highlighting 5G from executives at Qualcomm and Huawei, the Berlin-based IFA consumer electronics show served as a proof point that device OEMs and their ecosystem partners are working overtime to support the global deployment of 5G, which is progressing much more rapidly than previous generations of cellular.

There are a number of 5G devices in market now, including flagships like the Samsung Galaxy Note 10+ 5G, and signals from chipmakers and device OEMs indicate a major coming wave of new devices at multiple price points and serving specialized mobile use cases like cloud gaming, as well as expanded applications like fixed wireless access as a wireless home broadband alternative.

Huawei’s Richard Yu took IFA attendees through specs of the Kirin 990 5G, which the company called “the world’s first 5G SoC,” a disputed claim. The 990 5G is built on a seven-nanometer process and incorporates technologies from previous iterations of the Kirin line as well as the Balong line. 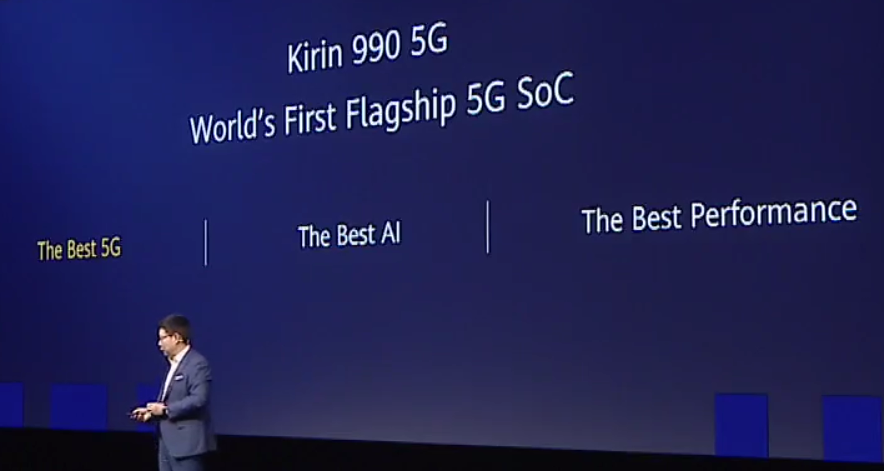 The updated Kirin is set to power Huawei’s upcoming flagship smartphone the Mate 30; that device is set for a Sept. 19 launch in Munich, Germany.

According to specs provided by Huawei, the 5G variant of the new modem can support up to 2.3 Gbps down and 1.25 Gbps uplink. The latest Kirin notably does not support millimeter wave frequencies, which provide those multi-gigabit-per-second speeds associated with 5G. Right now millimeter wave-based 5G networks are limited to the U.S. market where regulatory issues make it very difficult for Huawei to sell anything, smartphones included.

After making recent announcements around its flagship and mid-tier phones, Samsung used the IFA stage to unveil the Exynos 980 eight-nanometer mobile processor with an integrated 5G modem capable of sub-6 GHz downlink speeds of 2.55 Gbps and 1.28 Gbps uplink.

In a spec sheet, the company also noted that ENDC speeds of 3.55 Gbps down and $2.55 Gbps up. ENDC refers to 5G/LTE dual connectivity and, based on 3GPP documents, stands for E-UTRAN New Radio-Dual Connectivity. Essentially ENDC allows user equipment to connect to an LTE eNodeB that acts as a master node and a 5G gNodeB that acts as a secondary node. Sprint, for instance, uses this to deploy LTE and 5G in its 2.5 GHz spectrum at the same time; a complement to the split-mode manner the carrier configures its massive MIMO radios. 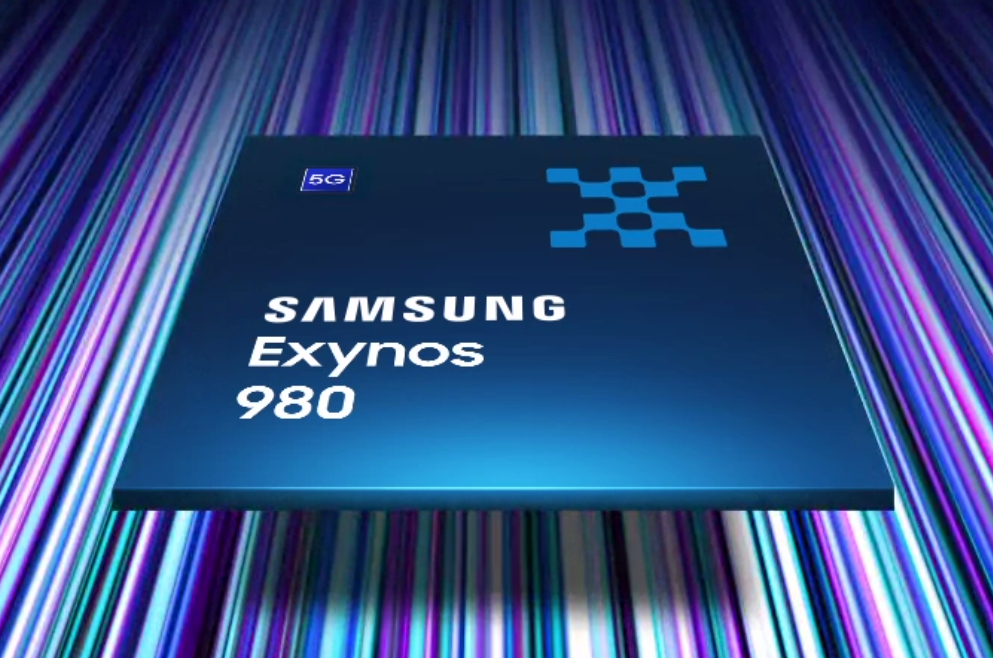 “With the introduction of our 5G modem last year, Samsung has been driving in the 5G revolution and paved the way towards the next step in mobility,” said Ben Hur, vice president of System LSI marketing at Samsung Electronics. “With the 5G-integrated Exynos 980, Samsung is pushing to make 5G more accessible to a wider range of users and continues to lead innovation in the mobile 5G market.”

Qualcomm President Cristiano Amon also gave a keynote presentation at the IFA, laying out the company’s ongoing 5G strategy, which is focused in part on driving access to 5G devices. 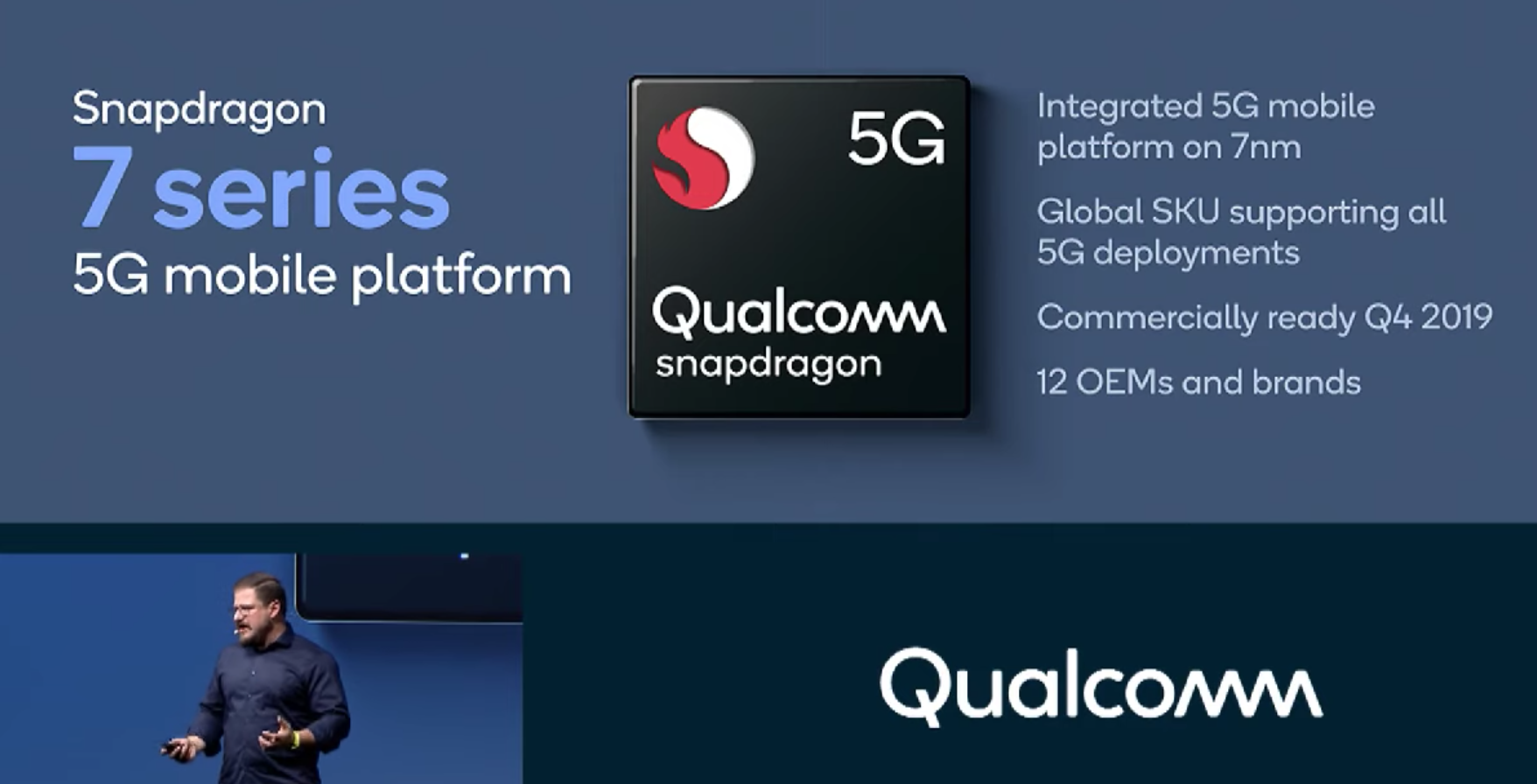 The first wave of 5G devices actually beat the availability of networks, Amon pointed out in his presentation. As service providers look to scale out, “We need to enable the operators to have that ecosystem ready so you can start providing new devices with dynamic spectrum sharing… We want all the users to have the benefit of this technology.”

To make that possible, Amon announced Qualcomm would bring its portfolio of 5G mobile platforms out of just the 8-series and into the 7- and 6-series in 2020. Amon said a dozen OEMs were already onboard. with the 5G-enabled 7-series. “We are going to bring 5G to scale with our many partners.”

Qualcomm’s second-gen X55 modem supports 5G at both sub-6 GHz and millimeter wave frequencies and, on the spec side, supports peak download speeds of 7 Gbps and peak upload speeds of 3 Gbps.

Notable in Qualcomm’s IFA presentation is support for dynamic spectrum sharing across the 6-, 7- and 8-series Snapdragon mobile platforms. So, in addition to bringing down the price point on 5G phones, this fits with operators plans to rapidly scale coverage in 2020 by using DSS, which lets LTE and 5G operate in the same band at the same time. For on DSS from Qualcomm, click here.

April 8, 2022 Dear Pennsylvania Wireless Association Members: As most of you are aware, PWA has a Regulatory/Legislation Committee. Through this committee, we have a unique opportunity to … END_OF_DOCUMENT_TOKEN_TO_BE_REPLACED